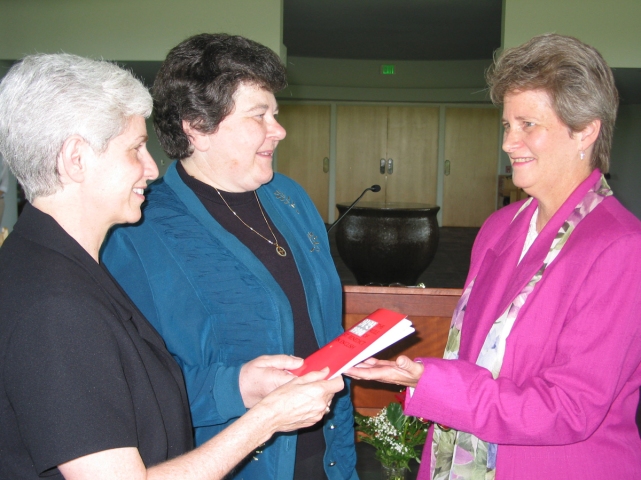 Sister Claudia Scharf, OSB receives a copy of the Rule of Benedict in her entrance ceremony at the Benedictine Sisters of St. Mary Monastery, Rock Island, Illinois.

I’ve come to believe that the Rule of Benedict is about a way of living with the failure of our ideals to manifest in fully satisfying ways.

Like many oblates, I have always been drawn to the visionary –especially to pondering what kind of world around us we could make, and seeking to make it real in the company of others.

Like many oblates, I have always been drawn to intentional communities — beginning with the half-summer I spent helping Ursulines in Youngstown, Ohio with a summer day school program when I was 21, through a year after college in the Lutheran Volunteer Corps (modeled on the Jesuit Volunteer Corps), to becoming an oblate after moving to western Illinois. There was also a very joyful senior year living with six college housemates, each of us taking a night to cook each week.

But what I am noticing right now isn’t the decades of ideals shared with others. It is how in his own spiritual journey, on the other side of an initial (and nearly deadly) failure in intentional community and after years of solitude, Benedict came up with a Rule of communal life that is grounded in passionate ideals, but tempered in the dulling furnace of everyday chores and conflicts.

The Spirit-driven, Christ-formed vision animates the whole of the Prologue:  “. . . while we are still in this body and have time to accomplish all these things by the light of life—we must run and do now what will profit us forever. . . . [W]e shall run on the path of God’s commandments, our hearts overflowing with the inexpressible delight of love.”

And then, in the Chapters that follow, we are drawn into the easily boring rhythms of how to live out a Benedictine life, from eating to sleeping to praying to taking turns at ways to care for the daily needs of the community. All the zest for a life in Christ gets funneled into the details of living with those in your household.

We know this by heart, if we know even a little about the Rule. But as I continue to work in an institution (a state university, in this case) that has abandoned a place for philosophy, religious studies, women’s studies, or African American studies majors, and as those of us who teach in these areas find ourselves in other departments (from mathematics to “Liberal Arts and Sciences”), I find myself trying to keep my footing in a vision of the liberal arts as the heart of the meaning of a university education.

At first glance, it is as if the university were abandoning a commitment to the “rule” that I thought we all shared — in this case, a commitment to the humanities, and to creating a space for faculty members to focus their lives on a scholarly career in the humanities, and for students (however few) to major in humanities and related liberal arts fields. Of course, the leaders of my university insist that they are eliminating majors, not “General Education” courses in the liberal arts.

Be that as it may, as I walk with my colleagues through changes that are uncertain and without a clear direction, not knowing if another failure of the state to pass a budget for higher education (and social services, and so much more) will lead to more lay-offs, I find myself disappointed in the leadership at my university, in the Board of Trustees’ lack of interest in articulating what a university is and what is core to it. And I find myself aware that I had assumed the work done by those of us in the humanities has value in the eyes of those outside the College of Arts and Sciences, which is often not the case.

Benedict had his own share of disappointments, precisely in forming community with those he thought shared his own vision and vocation. His Rule comes on the other side of some of those major disappointments, as he begins again. And what I am noticing these days is how the Rule slows those following it way down – as if “running on the path of the commandments” translates into the mundane and seemingly least imaginative details of everyday life, prompting us to be mindful of how to keep working – as much as possible – with persons who frustrate or disappoint us.

Reading through those daily-grind parts of the Rule leaves plenty of space for mourning all the minute and significant ways we disappoint one another. As I’ve noted before, the Rule does not always speak well in community contexts in which a common vision does not exist; and yet, the Rule’s details remind us that speaking our truths, listening to one another, and practicing kindness and reliability in our everyday responsibilities – all these things are part of the texture of community, even one that has lost touch with a sense of common vision.

In this sense, at least, the Rule may be about a way of living with one another amid disappointments that easily demoralize members of a community.

Of course, whether we are oblates or monastic, we likely work in communities that don’t follow the Rule of Benedict. I think of my colleagues and friends from around the country, from around the world, who have been articulating in conversations (including on that great neighborhood space of Facebook) a sense of profound disappointment in our country, or in some other nation — in ours, because of the persistence of racism in name-calling, in murder, in so many ways that say that some belong more than others to the American project; in other nations, because of attempted coups and human rights violations and a lack of freedom of speech. We can all add to the list of ways in which we are disappointed by the failure of our various communities to live up to a vision of care for and inclusion of all.

The Rule of Benedict could be seen as a sharp critique of all our failed efforts at community. But it also gives us a set of reminders that we can adapt to work with even in faltering or broken communities.

So here is a blessing for all who may be part of communities that have lost their way, but are struggling to keep their manners. The texture of the Rule speaks to the latter, even if our images of what we are about in our communities is contested and in transition, and even if we may lose our place in a particular community (through a lay-off or a decision to depart).

“Where there is no vision, the people perish” (Proverbs 29:18). But our disappointment with one another is a sign that a vision still lives, though it may not ever take the shape for which some of us work so hard. Even then, we are called to practice what the Rule describes as daily ways of working together attentively (and at times repentantly), thereby becoming grounded in a divine vision that both transcends and undergirds all the other sorts of visions that shape the communities we inhabit.

3 thoughts on “The Rule for Disappointed Idealists”